In this tutorial, we will generate basic engine sounds for vehicles using LMMS and Audacity and then set them up in UE4.

You can find other parts here:

Also, there's a video if you have difficulties to understand some parts.

I will be using LMMS 1.2.2, but newer versions also should work.

The first step is to download LMMS, install it, and then open it and we should see a new empty project. 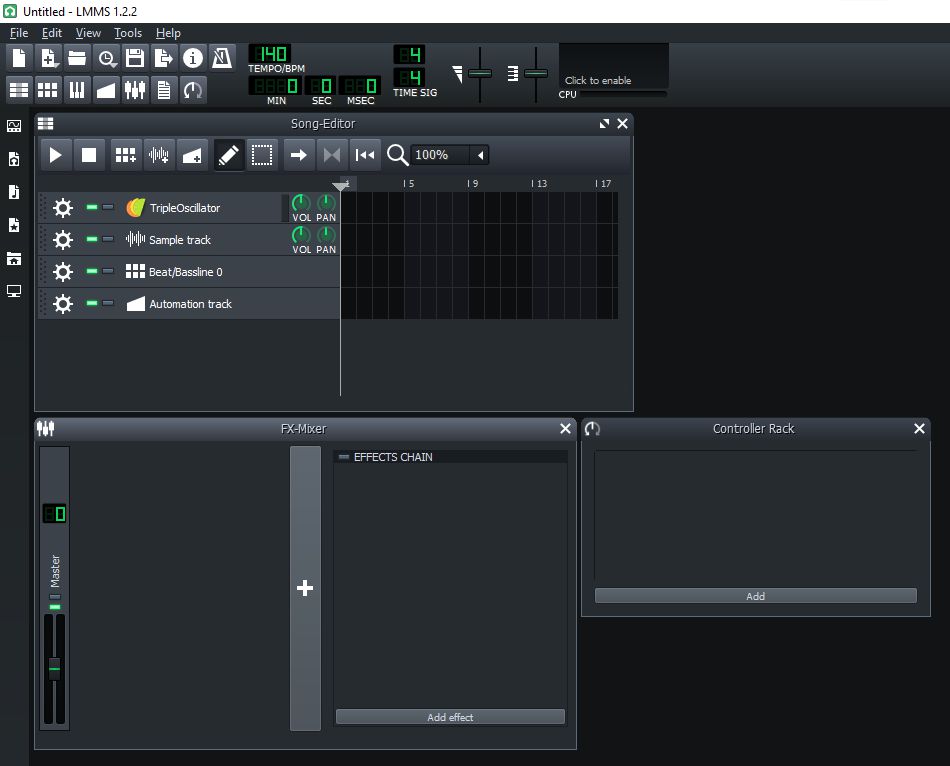 By default, we should see that an empty project has 3 windows open in it: Song-Editor, FX-Mixer, and Controller Rack. We will use Song-Editor and FX-Mixer windows, you can close the Controller Rack window, so it wouldn't bother you.

We see, that in the Song-Editor window we already have 4 tracks with different instruments and beat/bassline tracks. We will use only the TripleOscillator instrument, so we can remove all other tracks. 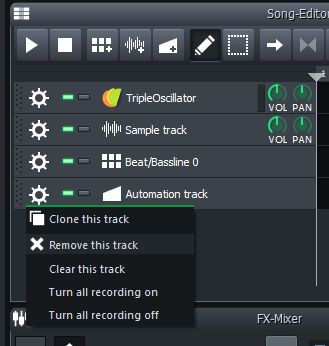 Now we need to make our TripleOscilator to make some sound. Let's make it play one note for some time. At first, we need to add a segment to the track and then in the segment, we will need to add a note. 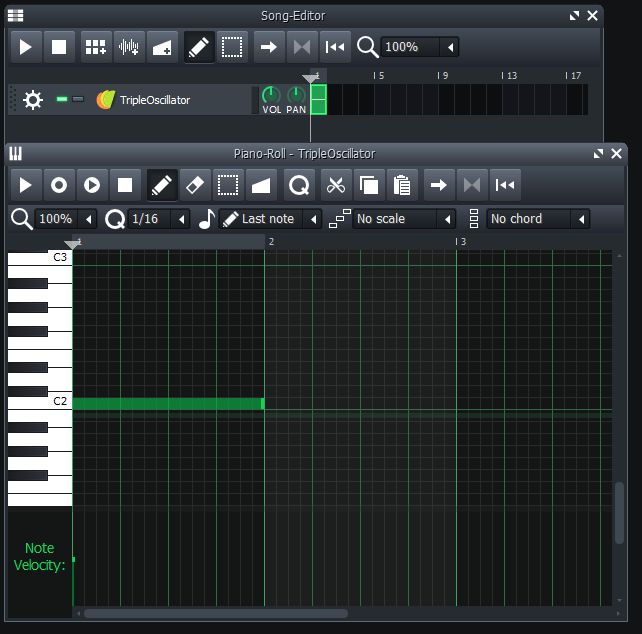 If you did all steps correctly, your piano roll and song editor windows should look like in the image above. If you would click the play button in the piano-roll window, you should hear a deep hollow looping sound. But if you will click play in the Song-Editor, the sound will not loop. Because we will not work with the piano-roll window anymore, let's enable looping in the song-editor playback.

We have looping sound that doesn't sound much like an engine. Let's make it sound more similar to the vehicle engine by changing some settings for TripleOscillator. 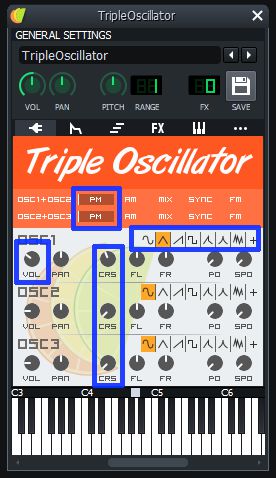 Now we got a sound that sounds somewhat like an idle engine. Let's amplify this sound by adding an amplifier effect to it. 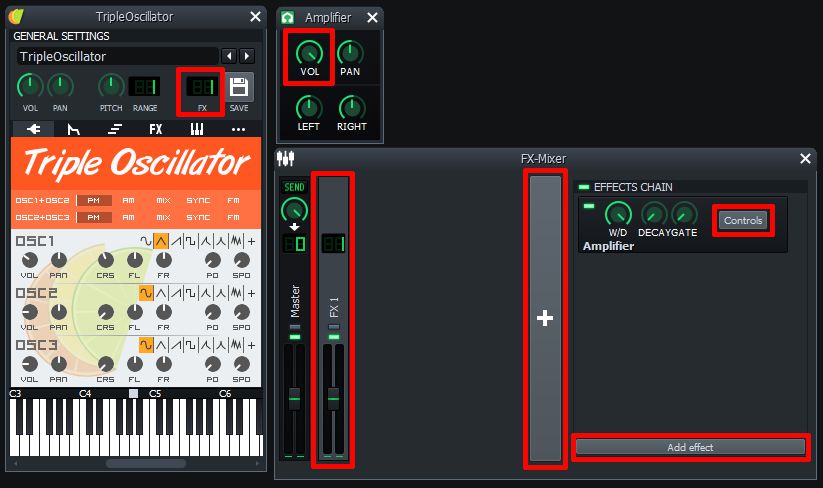 Now we have one sound ready for an idle engine. We need to make 3 more sounds for different engine loads. For that we can use the same TripleOscilator setup, but with little different settings. To do that quickly, we will just duplicate our current TripleOscilator track a few times and change settings in duplicated tracks. 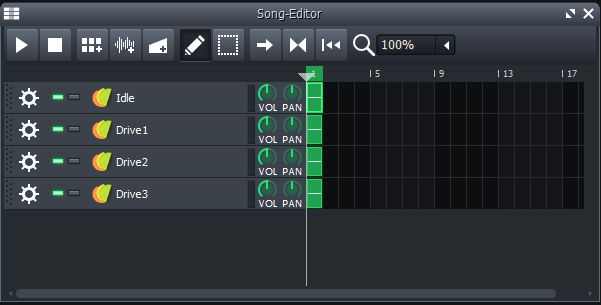 Now we need to change CRS values for each track.

You might have a question, why do I choose those CRS values? I just experimented, and those values felt best for me. Experiment with them if you will want to change the end result.

Now we can export those sounds. 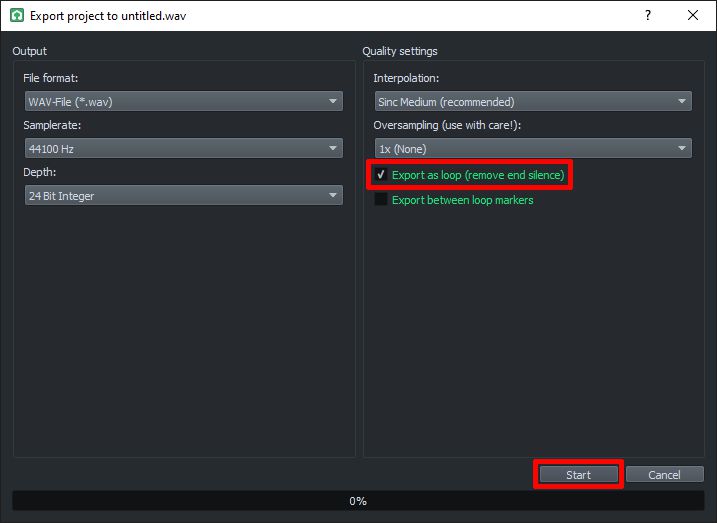 If we would import our previously generated sounds straight into UE4, then we would hear that they aren't perfect loops. You would hear click like sound when the sound would make a loop. To make those sounds loopable, we need to cut a small portion of its end, so it would make a perfect loop. We will do that by using Audacity.

The first step is to download Audacity, install it, and then open it and we should see a new empty project. 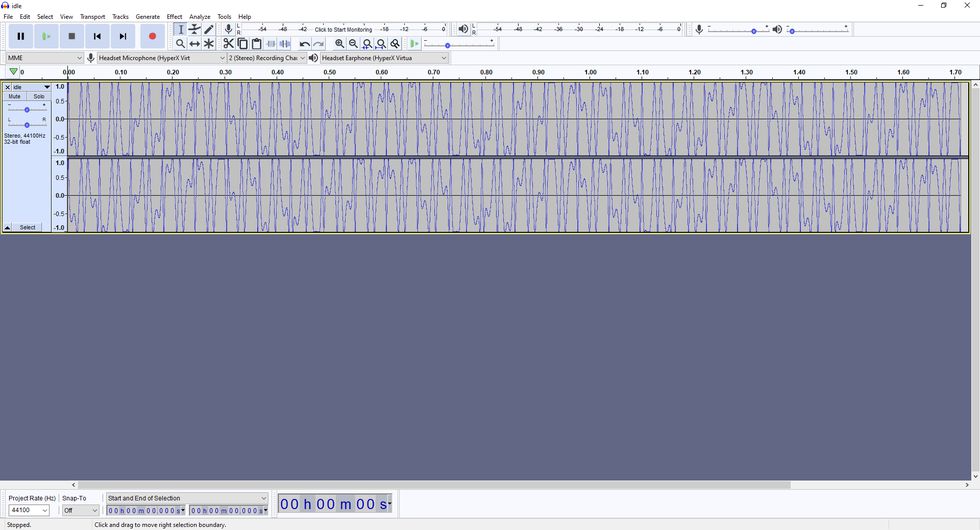 Now if we would Loop Play (press Shift+Space or hold Shift and click the play button) this sound, we would hear the click at the end of each loop from what we want to get rid of. To fix that, we need to make the sound's end part seamlessly blend with its start part.

Let's inspect our audio file's waveform, so we could understand what we need to do to make a sound like a perfect loop.

We can see that the audio's waveform starts around the middle line of the track, and it ends way below the track's middle line. That's the reason we hear a click at the end of the loop because there's a jump in the waveform.

You might think that we can easily fix that click at the end of the loop, by just cutting the ending of the waveform so it would end at the same place as it starts. This would remove the obvious click at the end, but you could still hear when the loop ends if you would listen carefully to it.

If you look at the image above and the beginning of the sound waveform in the previous image, then you will see that selection looks the same as the start of the sound. That's why we are getting a seamless loop.

Now we can export it by pressing File -> Export -> Export as WAV -> Set location -> Click OK in the Edit Metadata Tags window.

Repeat the same process for each sound.

At first, we need to import sounds in our UE4 project.

Now we need to create a Sound Cue asset that will use all our sounds to make one sound that we could easily use for our vehicle blueprint. 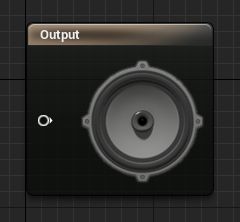 We will see that in the sound cue asset we only have one Output node. We need to add our sounds into it, so we could do something with them.

Right now our sound nodes aren't looping. We need to set them as looping.

We need also to change some parameters for these nodes.

For each Continuous Modulator node change Pitch Modulation Params into their details panel to the following ones:

We now have 4 node outputs, but the Sound Cue output has only one input. We need to merge all these node outputs into one input, and we will do that by using Crossfade by Param node.

As for Continuous Modulator nodes, we also need to change parameters for this node.

In the Crossfade by Param node's details panel, change parameters to the following ones:

From where I got all those values? I just experimented with them until I got to this point. Try to experiment with the values by yourself so you could find the sound that will best suit your needs.

If we would use this sound cue, then we would hear vehicles sound even if we wouldn't be near to the vehicle, and we couldn't determine from what side sound comes from. That's why we need to set Attenuation settings for Sound Cue. 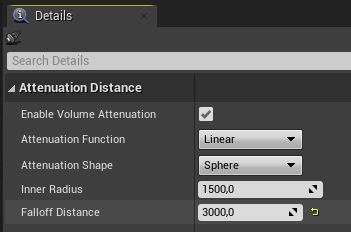 Now we need to set it in our Sound Cue settings. 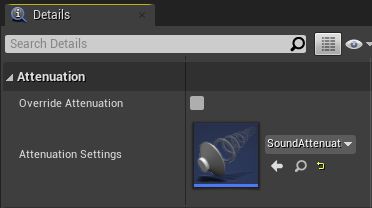 Now our Sound Cue is ready and we can set it up in the vehicle's blueprint. 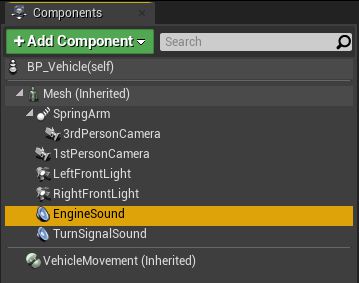 And that's it. Now our vehicle has a basic engine sound set up.

In the previous tutorial, I forgot to set up Sound Attenuation for the turn signals. In the Vehicle Blueprint select the TurnSignalSound component and in the details panel set Attenuation Settings to SoundAttenuation asset we made in this tutorial. 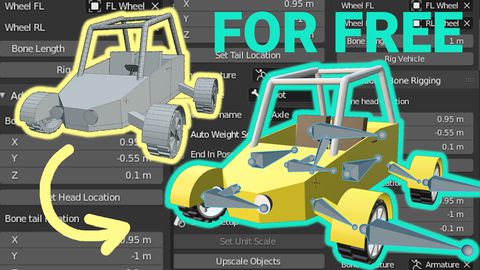 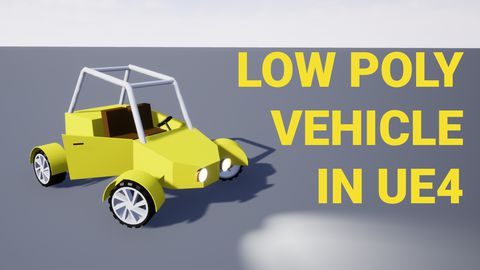 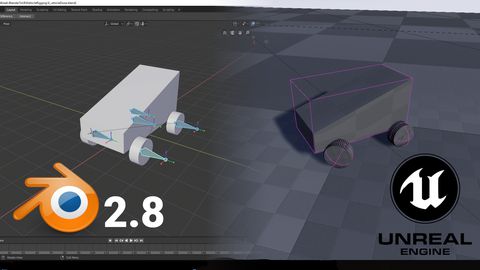 How to rig vehicle in Blender 2.8 for UE4 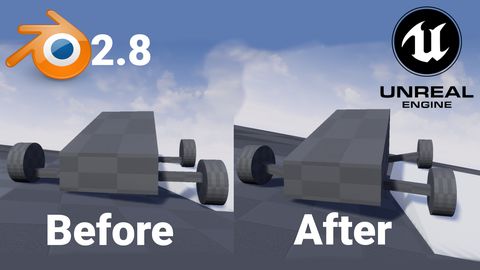 How to get simple suspension animation for vehicle in UE4 with Blender 2.8 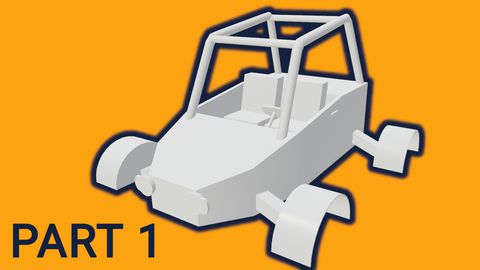 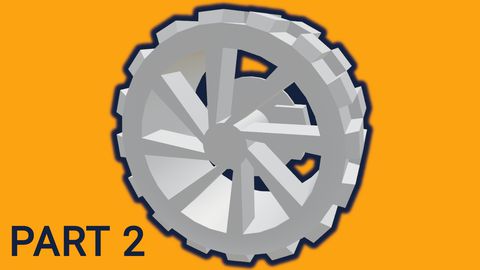 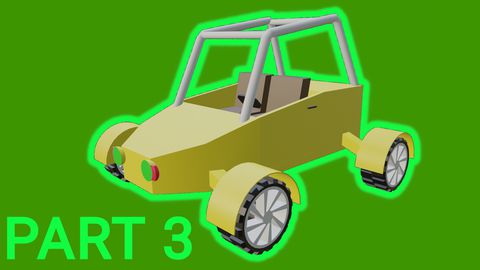 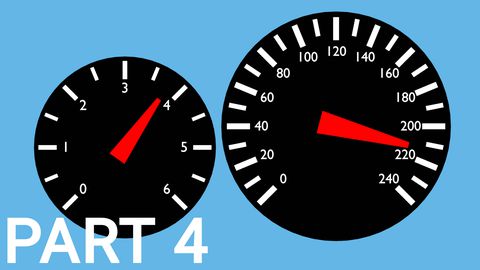 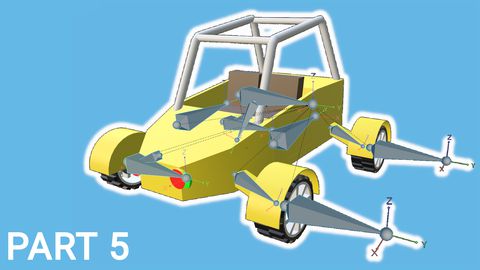 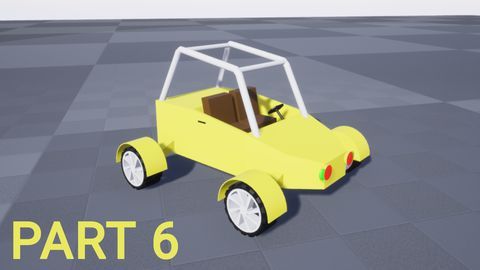 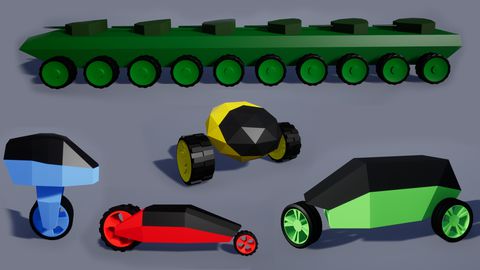 How to use Simple Wheeled Vehicle Movement Component in UE4 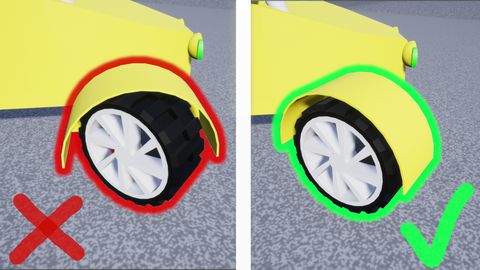 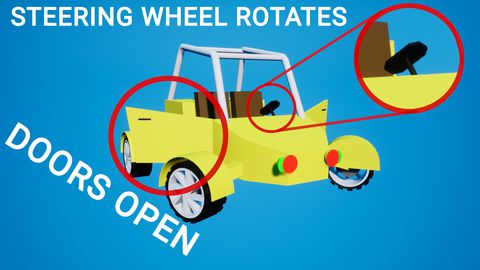 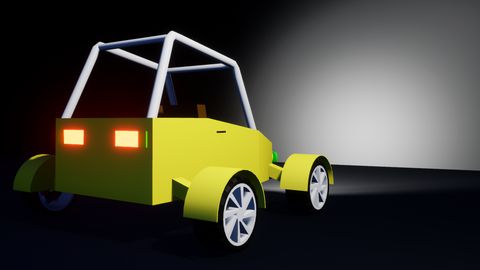 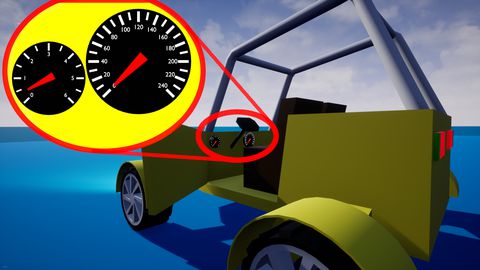 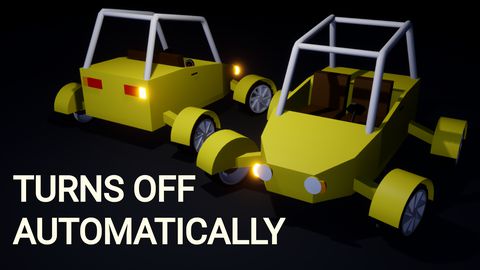